Hey everyone! Did you survive Halloween and the day after Halloween? I really think November 1st should be declared a holiday. Nobody (including myself) has the ability to concentrate on school after a night full of candy! It was our first Halloween in our new place, so I wasn't sure if we would get any trick-or-treaters seeing as we live in the boonies. So I went out and bought some candy just in case. Well, of course, no trick-or-treaters showed up... so that bowl of candy is all for me and the baby. We definitely aren't complaining! ;)

I am finally getting around to join in Doodle Bugs Five for Friday weekly linky party. I have some fun freebies for you, so stick around!! Some are Halloween related, so you might have to save those for next year! :) 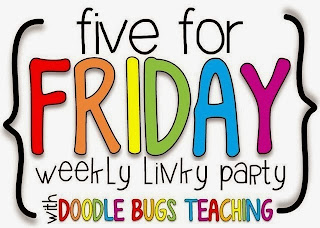 We did some practicing with 2D shapes... One day I read the book "The Shape of Things" by Dayle Ann Dodds and had students complete their own shape pictures. They turned out pretty cute! I just photocopied some blank shapes onto some bright coloured paper and had them turn the shape into a picture. 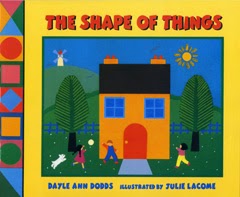 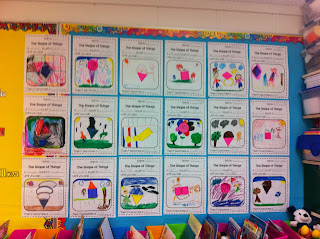 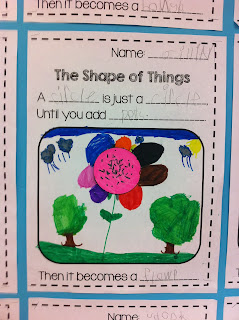 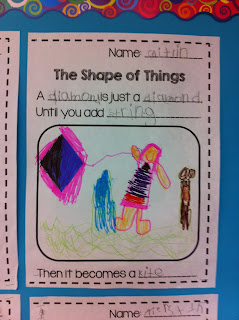 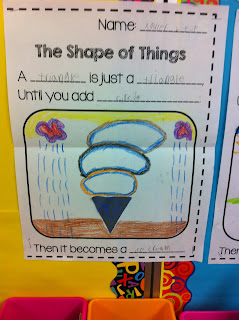 I enlarged the sheet onto large 11x17" paper so they had a large space to draw their picture. You can download the recording sheet and shapes {here}.

This next freebie is for one of my co-workers from last year. She mentioned liking my "Turkey Trouble" math game (seen here), so I made a new version called "Pumpkin Patch". Students roll 2 dice, count the dots, and find the pumpkin with the matching tally marks on it. My kiddos had fun with this game today! I made two versions--a coloured game board that you can laminate and use with cubes or a black/white version that students can colour. I like the black/white ones--easier to prep and takes longer to play! ;) You can download this game from {here}. Clipart is from KPM Doodles. 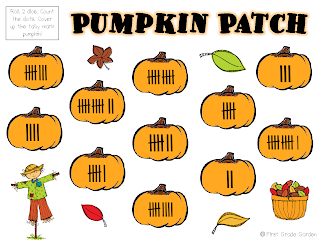 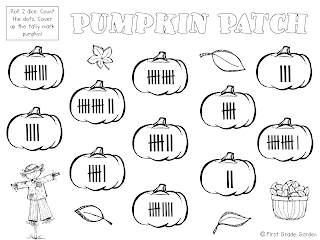 I teach in a community that does not celebrate Halloween.... they don't do trick-or-treating in the town and they don't celebrate Halloween at the school. Lots of my class still go trick-or-treating though... they just drive five minutes to the bigger city next door. I don't get the big deal, but to each their own, right? Well, last week our juniour high student council decided to plan a spirit week for this week. So we had pajama day Monday, opposite day on Tuesday, grade colour day on Wednesday, costume day on Thursday (Halloween = no, costume day = ok), and wacky hair day today. So we didn't have one day of craziness, but we had five!! It felt like a VERY long week. But costume day was a lot of fun. I only had three that did not dress up. I decided to make my costume match our author of the month. 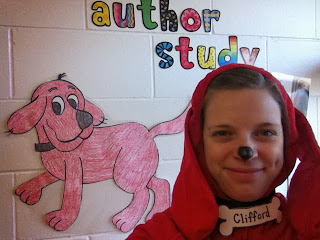 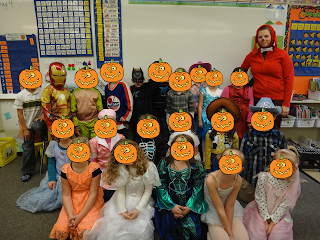 I had them do a little writing about their costumes. They all had lots to write about for this!! For my students that did not dress up, I had them write about what they had learned about pumpkins so far. This pleased them too. You can download the writing page {here}. We called our day Costume Day, but I made one that said Halloween too. Clipart is from KPM Doodles. 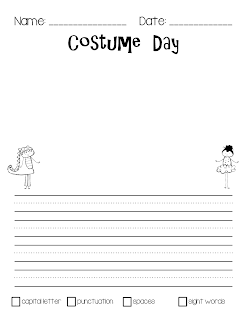 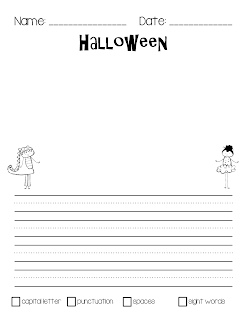 On the back of this writing page, we did a little candy graphing activity. This is probably a Canadian activity because you don't have chocolate Smarties in the States. So crazy!! They're like M&Ms, but a bit larger and flatter. Anywho, they made a Halloween version of this candy called "Scaries" that were only brown and orange coloured (as opposed to the original rainbow ones). I gave each kiddo a treat-size pack and had them graph their candy. They did a great job with this activity! You can download the graph {here}. The border is from Pink Cat Studio. 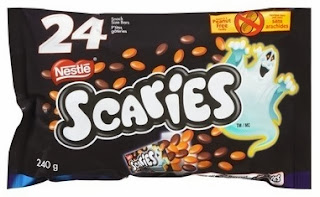 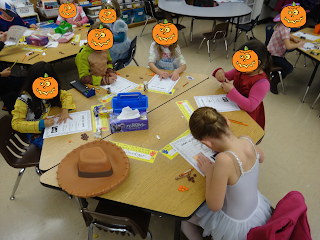 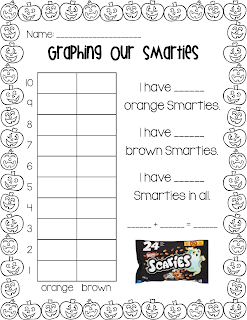 After our little study of pumpkins, we did some investigating of our classroom pumpkin (using Cara Carroll's The Great Pumpkin Investigation journal). We measured it, counted the lines, weighed it, described it, saw if it sank or floated, and counted the seeds. Then we voted on how we should carve it. He turned out pretty cute! 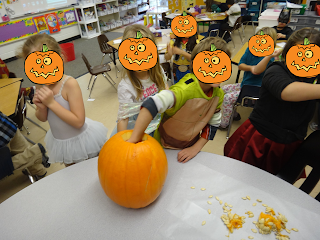 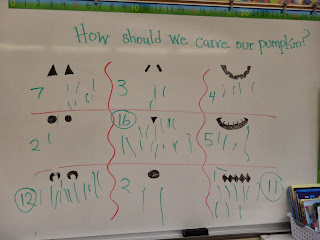 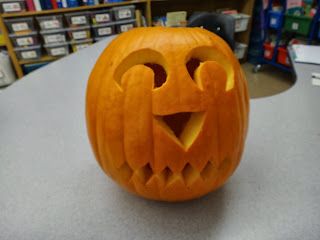 With everything going on in October, I also had to have my first formal evaluation by the vice-principal! I read on someone's blog that they always tell the kids before hand that the principal is coming in to observe the students (not the teacher), so they are on their best behaviour! I tried this and it worked pretty good. As soon as the VP walked in, they all sat up a bit straighter and were trying their best.

For my lesson, I decided to do a writing lesson on creating proper sentences. If you downloaded my weekend journals or some of my other writing pages, you might have noticed I have a little check list on the bottom. I try and put this check list on the bottom of all my writing pages. The check list is capitals, punctuation, spaces, and sight words. We go over this list all the time and the students are getting pretty good at checking over the list themselves and making sure their sentences are correct. For this lesson I had them remind me of the four things we look for. Then I introduced them to Mr. Fix-It. Yes, he looks a lot like Felix Fix-It from the movie "Wreck-It Ralph" (which got them excited and engaged right away), but this is actually Ernie Fix-It and he helps us fix sentences! 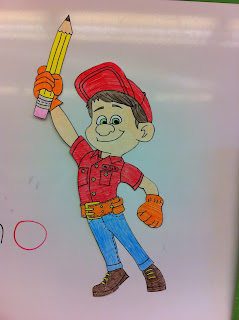 I wrote an incorrect sentence on the board and had the students help me identify the errors and explain why each thing was a mistake. Then I rewrote the sentence correctly underneath. 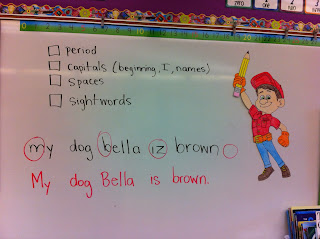 Then I gave each pair of students a re-writable sentence strip with a different sentence on it (I used sharpie, but that can always be erased after). I also gave them a dry erase marker and a blank strip. Each group had to circle four errors in their sentence and then rewrite the sentence on the blank strip. Then I had each group read their sentence and explain why they circled each mistake. The lesson went really well and the VP seemed impressed with the students' presentations. Success! :) 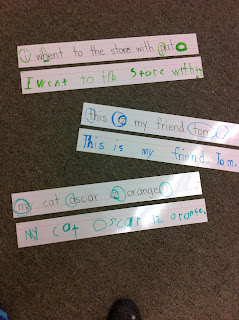 Well that's it for me. I've got two puppies who need some cuddling on the couch, a fiance I haven't seen all week, and a movie waiting to be watched. Have a great weekend everyone!!
Posted by Amanda at 19:51